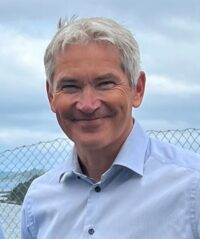 qWave is growing, and as of May, Jan Ove Nesvik is the company’s new CEO. With almost 30 years of experience from various oil&gas companies, of which 20 in various management positions, Nesvik will take lead on bringing the company further, from startup to market.

Nesvik began his career at Conoco and has worked in finance, budgeting, commercial, business development and strategy throughout a long career. But even though his CV shows many different companies, he has only changed jobs once before:

– I started in Conoco, which eventually became ConocoPhillips. Then I worked in EON Ruhrgas and helped build this company in Norway. EON was acquired by DEA, which further merged with Wintershall, so I have experienced both stock exchange listings, mergers, and sales of companies.

For the past two years, Nesvik has worked with his own concept within digitization, a decision support tool for managers in large companies.

– What I was looking for was first and foremost to work with a unique idea and develop it into a commercial product. When I heard about the possibility in qWave, it hit me hard, and I felt that this was both right and incredibly exciting to join. I get an inner drive from creating something, and the journey that we are facing in qWave is something I am really motivated for. Not least being allowed to create jobs and contribute to the green shift, how rewarding isn’t that?

What knowledge do you hold that qWave can benefit from?

– I have gained solid experience around how oil&gas companies operate, how they make decisions and how the dynamics work in the large companies. I think this will come in handy when we are to commercialize our product and establish ourselves in the market, says Nesvik. He also has extensive international experience, with several years of residence in both the UK and the US, in addition to 12 years in German oil&gas companies.

After two months in your new job, what are your thoughts?

– This is a company with a technology that has great potential for success. The employees are skilled with very high competence at what we do. Not least, we are developing a product that the market is screaming for, so the next few months leading up to the first testing in a real environment will be incredibly exciting. With solid partners such as Equinor, Neptune, OMV and Innovation Norway, I must say that it gives an extra stamp of quality. Even though I did not know the technology when I accepted the job, I was both convinced and incredibly impressed by what entrepreneur Hans Petter Eng has achieved. In addition, the company has gained both investors and a solid board, which indicates that many believe that this technology will succeed.

What are your ambitions for the company?

– Now we are in the phase where we are building the first version of the tool. It is in practice research and innovation, and it has been an eye-opener for me how complex it is. The tool consists of around 1500 different parts, of which only 400 of these are prefabricated. We are talking fine electronics, mechanical parts, high pressure, hydraulics and high voltage. That says a bit about the complexity! So, getting a successful first test now, first onshore, and then offshore, is incredibly important for the next steps. If this technology delivers on what we want in the future, the possibilities are practically unlimited for where we can take it further. That is where my ambitions lie ahead, to take this into the market and develop it further. Then we are talking exploration wells, but also unimagined possibilities within safe storage of CO2.

– This is about taking one step at a time, building and testing the tool in a smart and safe way, something we all work on together now. A successful test result is my first ambition, then, let’s talk again, Nesvik concludes with a smile.